Exclusive Interview With ‘Uchechi The Uterus’

It is a general consensus by Women all over the world that periods are unnecessary. The entire menstrual cycle is a personal attack to our very existence. Beginning with periods and its accompanying horrors—extreme irritability, vomiting, debilitating cramps, period diarrhea, breakouts (to name a few). After which, your body prepares for ovulation and you ovulate. With all the wahala that comes with that (don’t believe the cute ovulation symptoms you see online) your body will still have the guts to rudely introduce an interlude of Pre Menstrual Symptoms before you start bleeding again. It is gbas gbos, a cycle that goes on and on with no end in sight. Women literally have like 3 days to be their true selves, the remainder of the days, we are ruled by hormones, pain and vibes.

Thankfully, I got an opportunity to chat with Uchechi the Uterus. She prefers that the owner of the body she belongs to remains anonymous but she vouches that she speaks for most (not all) uteruses. In this exclusive interview, she opens up on why her fellow members are always putting their owners through the absolute most. 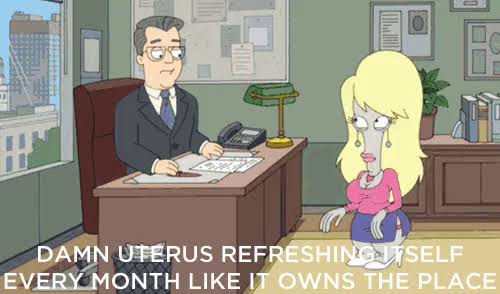 Good Day, I Am So Glad To Have You Here.

Uchechi the Uterus: I am happy to be here o. As popular as Uteruses are, one would think we get many interview opportunities like this, but we actually don’t. Everybody talks about us, even going as far as making legislations on what our bodies are allowed and aren’t allowed to do, but no one wants to ask how we are doing. Even the bodies we each belong to never communicate respectfully with us, and it hurts so much because we love them and want the best for them.

Hm. That’s A Shame. Have You Ever Considered That No One Approaches Uteruses Because Most Of You Are Considered To Be… Dramatic?

Uchechi the Uterus: I don’t blame you. I was trying to be civil and not bring up the litany of profanities you screamed at your own uterus during your last period.

Uchechi the Uterus: You think She won’t tell me? If there’s anything about Uteruses, it’s that we are big on solidarity.

Uchechi the Uterus: You better apologize before your next period starts, because your Uterus promises to deal with you.

..You Mentioned Earlier That Uteruses Love Their Owners And Wants The Best For Them.

Uchechi the Uterus: And that is hundred percent correct. When our owners weep because government of nations are forcing them to keep unwanted pregnancies, we weep with them too. The only people allowed to depress, bully and frustrate our owners is us. No one else.

Can You Explain What You Mean By Saying ‘Uteruses Depress And Frustrate Their Owners’ ?

I Just Want To Give Our Non-Female Audience A Picture Of What You Are Capable Of. Please Don’t Be Angry.

Uchechi the Uterus: Okay well, during our monthly International Uterus Committee meetings, we invent new ways to surprise the bodies we belong to during their menstrual cycle. Like last month now, there’s one uterus I met that said she’ll work hand in hand with our associate hormones to give her owner who recently started a new skin care routine very ripe pimples. I thought that was pretty cool. It’s something I have not tried before sha.

Some uteruses are more creative than others oh. You can see the ones that will sprinkle a tiny bit of depression on their owners, some will send theirs to the hospital to relass and be taken kiaroff, while others are so lazy, they will leave their owners to pass through their cycle with no single headache. Tufia! But generally, I think most Uteruses and associate hormones live for period diarrhea *let’s out evil laugh*. It is actually a personal favorite of mine. Send her to the toilet throughout the day. I think it makes for good practice for childbirth.

Uchechi The Uterus: Because we can?

If You Claim That Uteruses Love The Bodies They Belong To, Why Are They Making Life So Difficult For Their Owners?

Uchechi the uterus: Jamb question ni o. Don’t they make life difficult for us? It is always about them, what about us? What about our happiness?

So How Can Women Make You Happy, So That You Can Make Them Happy?

Uchechi the Uterus: We are the womb, a hollow space, constantly waiting, begging to be filled up. You cannot begin to fathom the emptiness we literally feel. All we want are babies, simple. The modern woman takes time before she begins to have children, and when she does, it is usually a very small number. It is not fair. Our very essence is to nurture an embryo till childbirth, so we constantly crave for the company of these tiny humans. We promise that if you get pregnant more frequently, subsequent period experiences will be seamless. I mean, just imagine painstakingly preparing every single month for the arrival of a baby and nothing comes your way.

Hm. I’m Getting You.

Uchechi the Uterus: It is worse for Uteruses who have sexually active owners employing the use of contraceptives. The false hope that their owner will get pregnant after rounds of sex, is so crushing. That’s why during our monthly meetings we developed the Trickery and Deception Division. This unit specializes in making sexually active women think their ovulation or (pre)menstrual symptoms are pregnancy symptoms. Since these women deceived their Uteruses that they are ready to make babies, their uterus in turn will deceive them to think that they are pregnant.

Uchechi the Uterus: It is actually amusing to watch. The hysteria and panic is so damn hilarious. Have you ever seen a woman peeing on a stick a million times, checking to make sure she isn’t carrying? Some symptoms we initiate are so convincing it leads certain women to manifest more concrete pregnancy symptoms, when it is actually all in their head. A close Uterus friend of mine told me of her owner who was convinced she felt a baby’s kick. Meanwhile aunty was just ovulating.

So What You Are Trying To Say Is, We Should Get Pregnant So That You Wouldn’t Punish Us? Like, We Should Be Giving Up 9 Months Of Our Lives All The Time, Then You’ll Act Sane And Eliminate The Chaos That Comes With Periods? Can You Even Hear Yourself?

Uchechi the Uterus: You’re very rude. Big big problem for whoever doesn’t want to fertilize their egg and get pregnant. Walahi, If I do not try and end your life with painful period symptoms, I will simply make you run mad by making you believe your ovulation/pre-menstrual symptoms are pregnancy symptoms. Try me.

Your Medical Name Is Uterus, And Your Household Name Is The Womb..

Uchechi the Uterus: You’ve got that right *smiles*

..But Your Spiritual Name Is Madness.

Uchechi the Uterus: I demand to speak to your Chief Editor.

*Disclaimer: Ignore all advice proffered by Uchechi the Uterus. If you want to manage your menstrual cycle and the symptoms that follow, consult your gynecologist.