“My Life As A Sex Worker”

Real AF is an anonymous series that explores the interesting lives of Nigerian women because navigating life as a woman in today’s world isn’t easy, and we all have stories to tell.

Hi Bellah, What Led You Into Selling X-rated Content on Snapchat? Can You Walk Me Through Your Journey?

So, I started off with full service sex work. I would walk into clubs, bars or lounges and get a few shots since I was not trying to become inebriated. I did this mainly so the attendants would not bother me while I worked. Sometimes, clients would want short-time and already have hourly rooms booked. Some had comfortable cars and as long as there was a secluded space, we could run that too. They would subtly beckon me over, then we would leave the club to hookup. After a few clients, I would leave the club once I reached my target. If I was on the island, I would book a hotel to stay for the night and then go back to my one bedroom apartment on the mainland to shower and pick up any items. I charged high for overnights because it meant that I would not be able to have multiple clients at once and I needed to make at least a minimum of three short-times from just one hookup. That year, I charged N15,000 per short time and N80,000 for an overnight.

Do Your Family Members Know About Your Job?

Well, they didn’t at first but they sort of do now. In the beginning, my parents thought I was in school because I would tell them I was taking classes at the open university, and would use studying as an excuse for not picking my phone at night most times. At first, I was not able to be honest with them about the line of work I wanted to go into, but now they are somewhat aware and have allowed me agency because my work puts food on our table and sends my juniors to school. I have two younger brothers who live with my parents on the mainland. As a result of the nature of my handwork, I had to leave the house at an early age.

How Did Camming on Snapchat Begin From Then On?

While doing hookups, one of my regular clients called me from overseas and asked me to do a sex video call with him. He said that he would pay for my time. It was my first experience with such a request and I was incredibly shocked that I had never thought to offer it before. Maybe I subconsciously convinced myself that my sex appeal would not translate well through the phone or I had become too familiar with full service sex work. I posted on Snapchat and Instagram that I would start doing video calls and received a lot of responses. It was very promising. A lot of clients also offered to pay me in BTC and they tipped well. Whenever I finished video calls, some of them would ask me if I also offered premium subscriptions. My only reluctance was that I did not know how much work went into it and I felt like I needed a better phone. At the time, I was using an iPhone 6 and I used to have low quality video issues while doing video calls. Thankfully, my customers were incredibly patient with me during the entire thing. I started saving up for a new phone and took on more video calls than before. Since I charged twenty thousand per twenty-minute session, it was incredibly lucrative.

What’s The Oddest Request You Have Ever Gotten?

Tell Me How You Met Your Boyfriend?

It was during the course of this that I met my boyfriend. I live on my own, but I am on the road with him for the most part since he does a lot of traveling for business. From the different hotels we stay at, I create a majority of masturbation and boy/girl content when he feels up to it. He is very supportive of what I do and always makes sure that I am making enough to fend for myself and my family. When I told him about needing the new iPhone for work, he gifted me immediately. When my other friends who are also sex-workers happen to be in the same state as I am, we collaborate as people pay higher for girl/girl content in Nigeria, which my boyfriend is also supportive of. I started my premium afterwards and stopped hookups completely. Right now, I charge N20,000 for a week of premium or sixty dollars BTC. Video calls are N30,000 for fifteen minutes.

What’s Premium, And How Is It Different From Hookups?

Premium is the best for my lifestyle since I am constantly on the move with my boyfriend. For hookups, I have to be in one city for at least a month to make enough. Now, once I have my phone, I can work from anywhere I please. Also, hookups can get quite exhausting as engaging in person means some sort of physical exertion, no matter how basic the needs of each client. I spend around the same amount on my beauty routine as I did while doing hookups, so I would not say that premium has been less expensive on self-care overall. While he might not mention it, I also think that my boyfriend is more comfortable now I do not physically see clients. I always used condoms, but I imagine that it still took a bit of getting used to. One disadvantage of premium though, is that Snapchat content restrictions do not support explicit content, which means that my accounts get taken down regularly. I have to write down the usernames of my premium members and have them follow backup accounts just in case. There have also been cases of scammers using my public pictures and videos to deceive others. I am still afraid that a victim of one of their scams might see me in public and hurt me, believing that I am the scammer. I really have to be careful in my movements.

What Are Some Costs That Are Unavoidable While Being A Sex Worker?

These could be mainly related to the standard of clientele any sex worker might be working with. For me, I have regular waxes just because a majority of my premium members prefer me shaved, as I have asked them in the past. Razors do not agree with me so I go for the waxing. Sometimes, I will let myself grow out, especially before or during my periods. Many sex workers have their ways of working around their period and yes, I also mean full service. So, the time of the month does not really affect business but I personally cannot get waxed on my period. The pain is heightened. Then I also get my nails, toes and lashes done. Not every month, but regularly enough that it is a constant bill.

What Would You Say The Hardest Part Of Your Job Is?

Probably the spending that goes into my appearance. Sometimes, I will have to braid my hair or buy a new wig. During a financially buoyant month, I might even fix a frontal. My heaviest billings usually arise when I send money home or there is a family emergency and I send even more. I was very slow saving money for a new phone because we were renovating some areas of our family compound. I have given up my one bedroom now as I was essentially paying for it while mainly living in different hotels. All my major properties are back home with family.

What Are Some Misconceptions About Your Job That You Will Like To Clear?

Sex work is still work, and shouldn’t be looked down on. No one likes their job, but we all get up and get to it because it is a means to survive.

If you’ll like to be featured anonymously on #RealAfWith21, click here. We will love to tell your story. 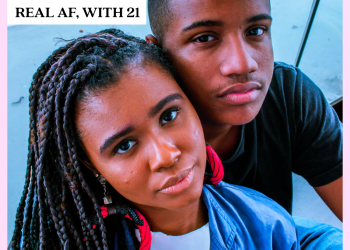 “I’m a Lesbian. I’ve Embraced And Accepted Who I Am”